After a couple nights in Copacabana, we were anxious to get out on the lake and visit Isla Del Sol.

We booked a boat out there through our hostel "Sonia," and planned on spending a night on the island.

We awoke that morning to a heavy rain, and were a little weary of going, as we wanted to hike across the island...

A last minute decision to go, was rewarded by clearing skies, and overall nice weather for the whole day.

The boat tickets out to the north part of the island were 25 Bolivianos/person.  Very cheap.  If you choose to go to the southern part, it's only 20.

We chose to get dropped off on the Northern part, and hike across the island to the south, and spend the night.

The Island was gorgeous, as its placement is shapely, with the massive Lake Titicaca all around it, along with several other scattered islands nearby and in the distance.  We arrived at about 10:30 AM, found a little spot to have a decent breakfast, and began our hike.  It's overall about 8km from the north to south via the trail.

About 40 mins in, we came to the first area of ruins, that was pretty impressive, but honestly, not a whole lot to see.  We probably "ruined" it for ourselves having just come from Machu Picchu!  Either way, the walk was really nice, and quite exhausting, seeing as though we already were at a very high altitude on the lake, and a bit higher on the island.

We reached the south part of the island in the late afternoon, and found a hostel up on the hill overlooking the lake.  70 Bolivianos for a private room.  Considering how touristy the island was, there was hardly anything open for dinner, but we found a spot with some good Trout, and hit the sack.

Isla Del Sol was a very touristy place...There were 4 times along the trail across the island we were stopped to pay a fee...It was very cheap, but it reminds you how touristy it is!  I'm so glad we went to the island, and highly recommend walking across it, the scenery is gorgeous! 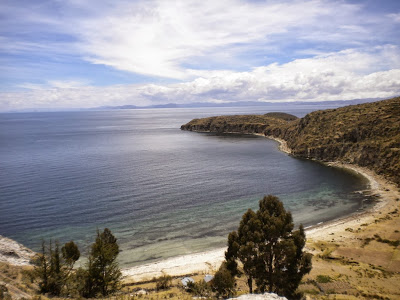 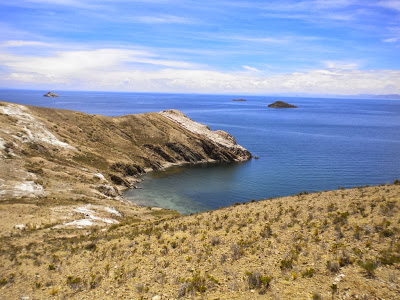 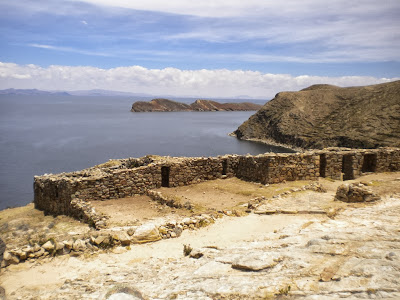 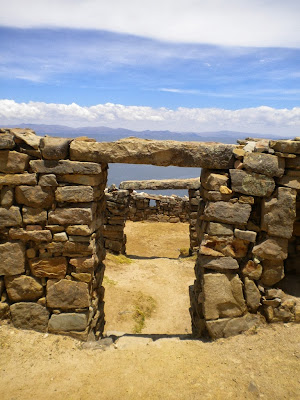 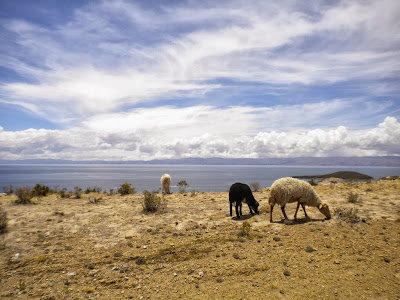