We left Vicuña in the later afternoon, and jumped on another bus north east to Pisco Elqui, where we had heard that there was a ton of campgrounds, and a good place to spend a week.

Pisco, the grape liquor that originated in Peru, is also heavily produced in Chile, especially in this region.  Infact, most of the grapes you see growing here won't be used for wine...In Bolivia, (in the Tarija region), they also produce grape liquor, but under the name "Singani."

Only an hour by bus, we were dropped off in "Downtown" Pisco Elqui, which was tiny.  A beautiful cathedral jetted up in the square, and several little shops scattered the small street.  Our Lonely Planet book (3 years old) listed a spot called "Camping Rinconada," that was about $4 per person to camp.  Sure enough, it had been sold, and was closed down...A guy in the square recommended going to "Solar de Barbosa" to camp, which was a 10 minute walk with all of our stuff.

We walked down the dirt path to the campground and were greeted at the gat by a strange guy from Viña del Mar, who told us to come sit down in the shade, and we'd talk about price...This was confusing, because the listed price on the gate was 5,000 Pesos/person, which is $10.  Very expensive to camp, in my opinion, especially if we're on foot, with only a tent, and no car.  I thought he would give us a deal, but it turned out he just wanted to chat for about a half hour about our trip, then he introduced us to the owner, who was firm on his price.  At this point, we were starving, and decided to stay for one night, then maybe find a cheaper spot.  The place was really nice, right on the creek, and we found a shaded spot for the night. 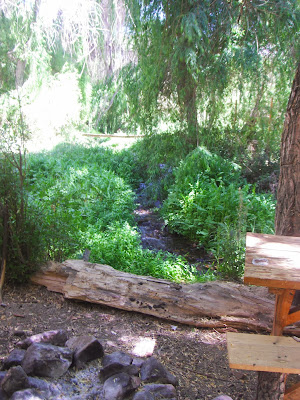 Next morning, I ventured out to find a better, and cheaper spot, and was successful just down the road.  We packed up, and trekked it out of the shade, and into the hot sun, down the road to "Refugio de Angel."

The owner met me at the gate, and gave us a good deal, as I told her we would stay for 4 nights.

The camp was also on the creek, but this one had a nice water hole, and a ton more shade.  We were 2 of maybe 5 total in the whole campsite for the first two nights, and really enjoyed it.  Collected some wood and had a great fire for cooking on, while enjoying some local Pisco from the valley, which was great. 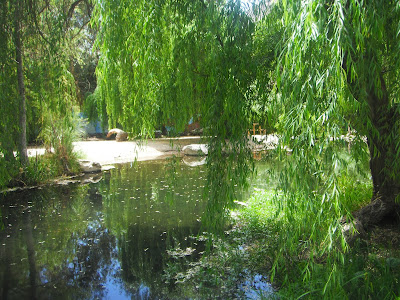 Also the second day, we ran into a couple that had been staying at Maria's hostel in La Serena, Michael and Chiara, from England and Austria.  We spent an evening hanging out with them, and enjoying the campfire, along with some local beers and Pisco.

The campsite was home to 3 massive German Shepherds as well as several massive cats.  One big white cat befriended us (especially Danica), and wouldn't leave our camp.  The tuna remnants probably didn't keep him away either, and she named him Rey.

We stayed through Halloween, and the campsite filled up super quickly with Chileans, getting away for their long weekend. 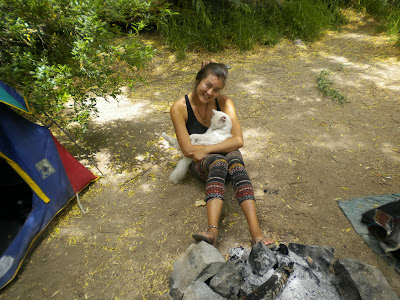 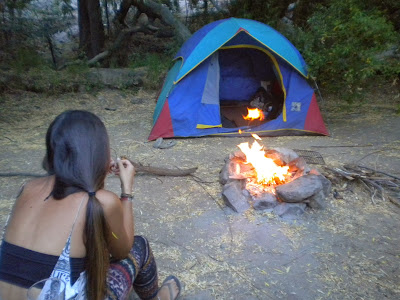 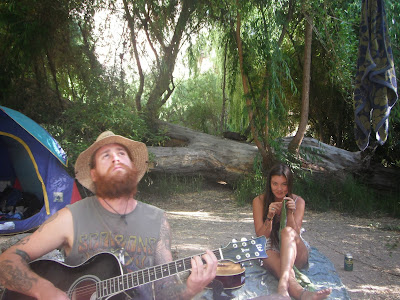 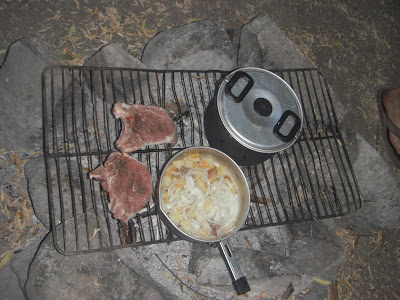 Some good cooking on the fire, including pork chops one night, some lentil stew, pastas, and whatever else we could muster up, proved to be a great time camping.  Only let down was we realized we needed some equipment upgrades, especially if we were planning on heading into Patagonia to do some real camping.  The zipper on our tent broke the first night, and now doesn't close, and my inflatable air mattress pad has a gash in it, and wont hold air.  Other than those things, we survived a week of camping, and can hopefully do some minor repairs.
Posted by Andrew Turner at 7:23 AM