Aticara - Volunteering on an organic farm for 2 weeks!

We left Chiclayo at about 10 AM on a bus to Chimbote, which is further south, and on the coast.  We again had a couple corny movies aboard the bus, and had an unbelievable scenery on the journey.

Out the window were stretching deserts, and jagged coastline in and out.  There were a couple stretches of highway that had signs reading "archeological area, keep out," leaving me wondering if there was some work being done on uncovering some new Peruvian findings...

We reached Chimbote, which is the biggest city in the Ancash region of Peru.  We were warned by the owner of the farm we were to visit, that in Chimbote, we needed to be on our toes, especially with taxi drivers.  We found and old man taxi driver, who was very nice, and took us across town to the tiny bus station heading up and into the mountains where we were to go.

Aticara, where we were headed, was not on our map, or in the book.  Turns out it was the tiniest little town we were to see thus far.  The neighboring town of Corongo wasn't even in our book, and it was quite the sight to see!

We got on the bus to Aticara in Chimbote at about 5:30 PM on a Friday evening.  We arrived in Aticara at almost midnite.  The bus ride was on a very windy mountain road, which we could see nothing outside, of course.  Eilif, the owner of the farm, was there to pick us up in Aticara.

We jumped in his old Subaru station wagon and headed off into the night.  We would spend the next 2 weeks working on his beautiful organic farm, and helping out around the property.

2 weeks seemed like it would be an eternity there, but it went by very quickly.  We awoke the next morning to an incredible view of the farm, at about 10,000 feet (3000 meters) up in the Andes.

Eilif was a really cool guy.  He's Norwegian, and married to a Peruvian woman.  He taught us tons about organic farming.  He is all about doing everything the natural way, and was full of information and insight on everything natural, from planting to animal feed.

Our second week there, we were left alone while he went to Lima with the family, and we were in charge of feeding all of the chickens (about 30 of them), and watering and caring for the crops.

His farm had no electricity, or running water other than a creek, and we were out in the middle of nowhere.  But, it was the experience of a lifetime, of course, and we cooked some great meals, and really got into the feel of being primitive for 2 weeks.  There was a hot spring just down the road, that we visited twice, and during our overall stay there, we had an incredible time. 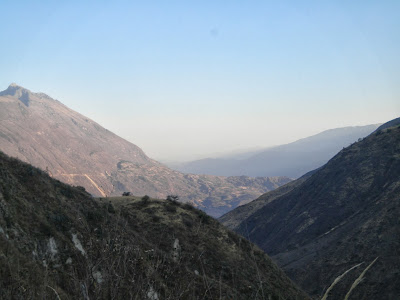