Once the city of Drug era Escobar, and clear and present danger, Medellín was really amazing, especially coming from me, because I generally like to avoid big cities.  They have an amazing metro system that covers approximately 23km up and down the city, a massive metro cable system (teleferico) that takes you above the barrio laden hillsides and up to the top of the mountain for a spectacular view of the city.  There is also a national park up top.  When we reached the top, and were reading one of the signs about the area, we randomly ran into a couple we had met in Boquete at Hostal Palacios.  We caught up with eachother on the trip, and took the teleferico back down the mountain.  Always great, and interesting running into someone you know, in random places!

We stayed in El Poblado district for 3 nights, at a really nice hostel called Casa Provenza.  It might have been the nicest hostel of our trip so far.  It was spotlessly clean, private bathroom, with a huge shower, comfortable, brand new bed, and huge flatscreen tv.  It really felt as if we splurged on a fancy hotel, but instead we were only paying $70.000 pesos per night.  Breakfast was included, via the restaurant next door called "Flip Flops," owned and run by a guy named Chris, who was very friendly and informative on what to do in Medellín.

Medellín is an awesome city to visit if you have a chance!  There is a great little bar around the corner in El Poblado, called Eco Bar, where they serve their drinks outside on tree trunk stump seats, and play good music.  Also, Tres Cordilleras Brewery, just outside of El Poblado has about 8 or 9 beers on tap, and on Thursdays they charge $22.000 pesos to get in, including 5 beers of your choice and a tour.  I guess they're pretty new, but coming up. 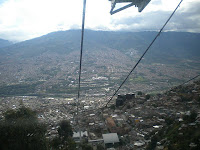 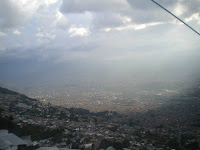 Posted by Andrew Turner at 1:12 PM