We decided to hit up Bogotá, for one, being it is really the transportation hub, and we really wanted to see it as well.  Ended up spending two nights there, at Chocolate Hostel, in La Candelaria.  We took the overnight bus from Medellin, which was fairly smooth.  After this bus ride, we came to the conclusion that in most cases, the overnight (red eye) bus, is best.  Main reason: you save money on a hostel or accommodation for the night.  It does throw you off a little, but if you can relax, and bring a blanket, you may get plenty of sleep.

We found out that a friend of mine, from back home, Tristan (T-Bone) and his girlfriend Phoebe, were going to be flying in that same day as us, and we found ourselves staying at hostels that were literally 4 blocks from each other.  Pretty amazing, of all the places one could be traveling to.

We got in touch with each other via the net, and met up that evening, right in front of our hostel.

Danica and I had done a little research, and knew that there was at least one micro brewery in town, and were set on finding it.  Too much Pilsner along the road, and not enough taste...

We found the BBC Brewery/Restaurant just down the road from us, and after a few pints, we enjoyed a delicious pizza from them as well.  I enjoyed a couple of their porters, and Danica enjoyed their red.  Delicious beers!

We all hung out the next day as well, and cruised around the city.  We took the cable car up the mountain to the Montserrat Church, and from up top, there was an amazing view of the whole city.  We visited the gold museum, which was quite interesting, and we went out in La Candelaria to a few places.

-BBC (Bogotá Beer Company) They have the actual brewery somewhere in the city, but a few of their own pubs, with one right in La Candelaria, with all of their beers on tap, and some decent food.  (We had the pizza).

-Mora Mora sandwich/smoothie shop, who make some great sandwiches for a decent price

-Doors Rock Bar (for those of you who crave a funky 80's metal themed hangout, where the owner entertains with only the best, and sleaziest music videos)

There was so much more we wanted to do and see, but we must move on down the road... 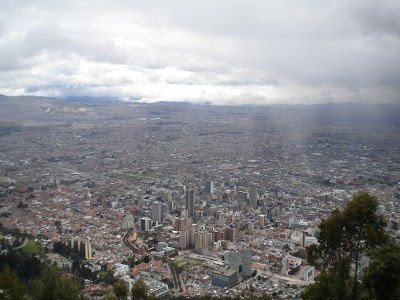 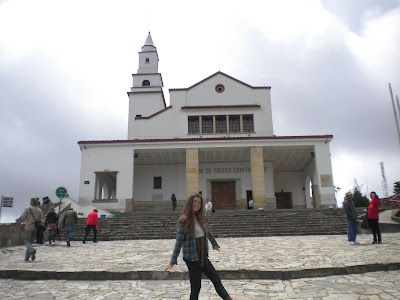 Posted by Andrew Turner at 2:38 PM