Happy New Year from the end of the world!!

There were two buses heading to Ushuaia that morning from Rio Gallegos, the first being "Marga" and ours being "Tecni Austral."  The buses left at the same time, but ours was held back at the Chilean border for some time, because one man had trouble with his papers.  We sat for almost an hour while he sorted them out

Back on the road, we were on our way.  The bus was filled with backpackers heading there for the same reason as us, to ring in the new year, as far south as you can pretty much get, (at least by bus).

The island of Tierra del Fuego is huge.  It's about half Argentina and half Chile.  Getting there is not as easy as it looks on the map.  It took about an hour from Rio Gallegos to the Chilean border, where we had to stamp in, and get our bags all checked by sniffing dogs, apparently looking for fruits and veggies, more than contraband.  Once stamped into Chile, we drove about an hour, until we hit the Strait of Magellan, where the bus boards a massive freight ship, with a ramp on the shore.  We all walked onto the ship, and the freighter crossed the Strait of Magellan, covered in a stormy looking sky, that made me imagine past explorers and conquistadors navigating the southern seas. 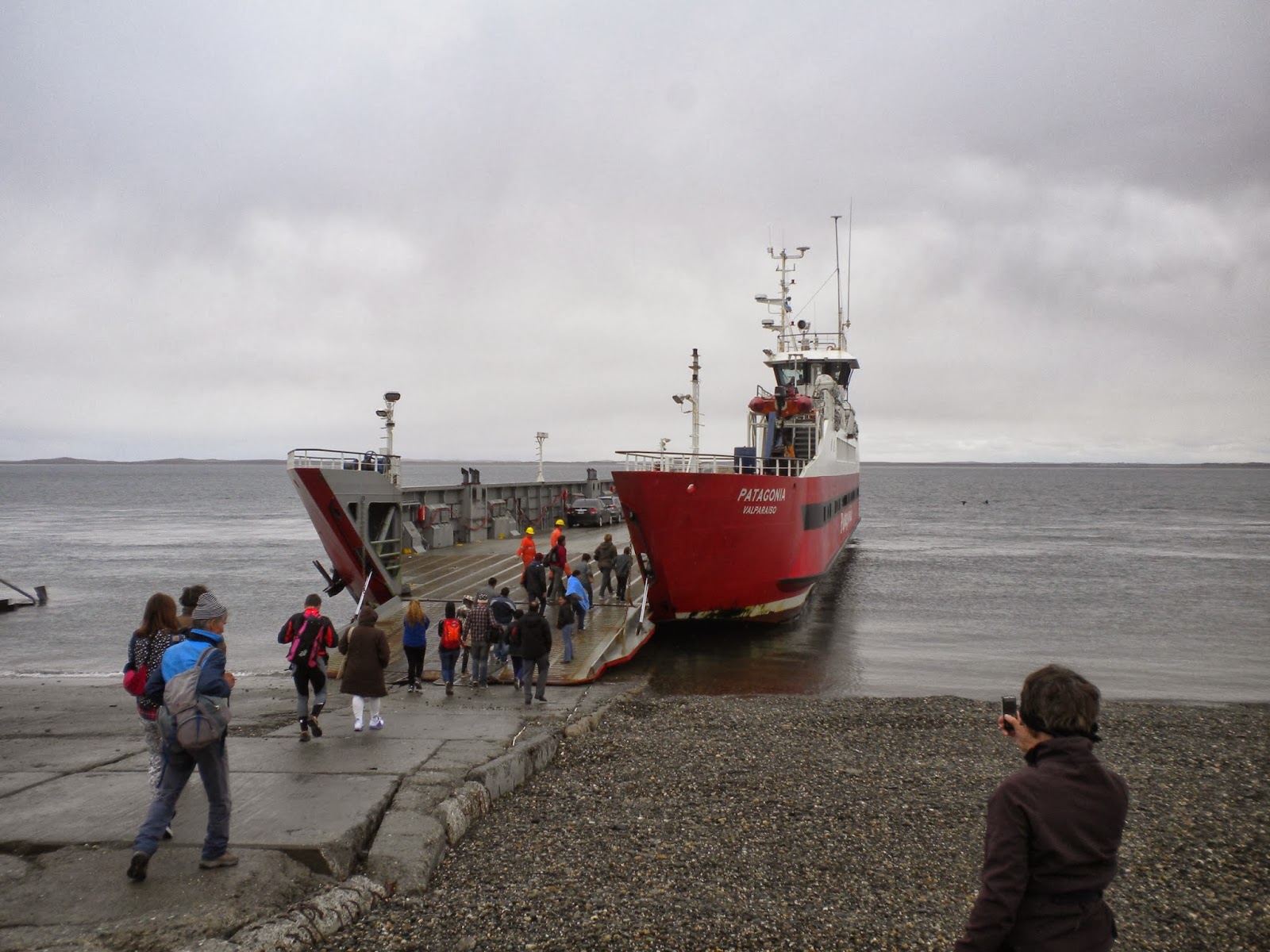 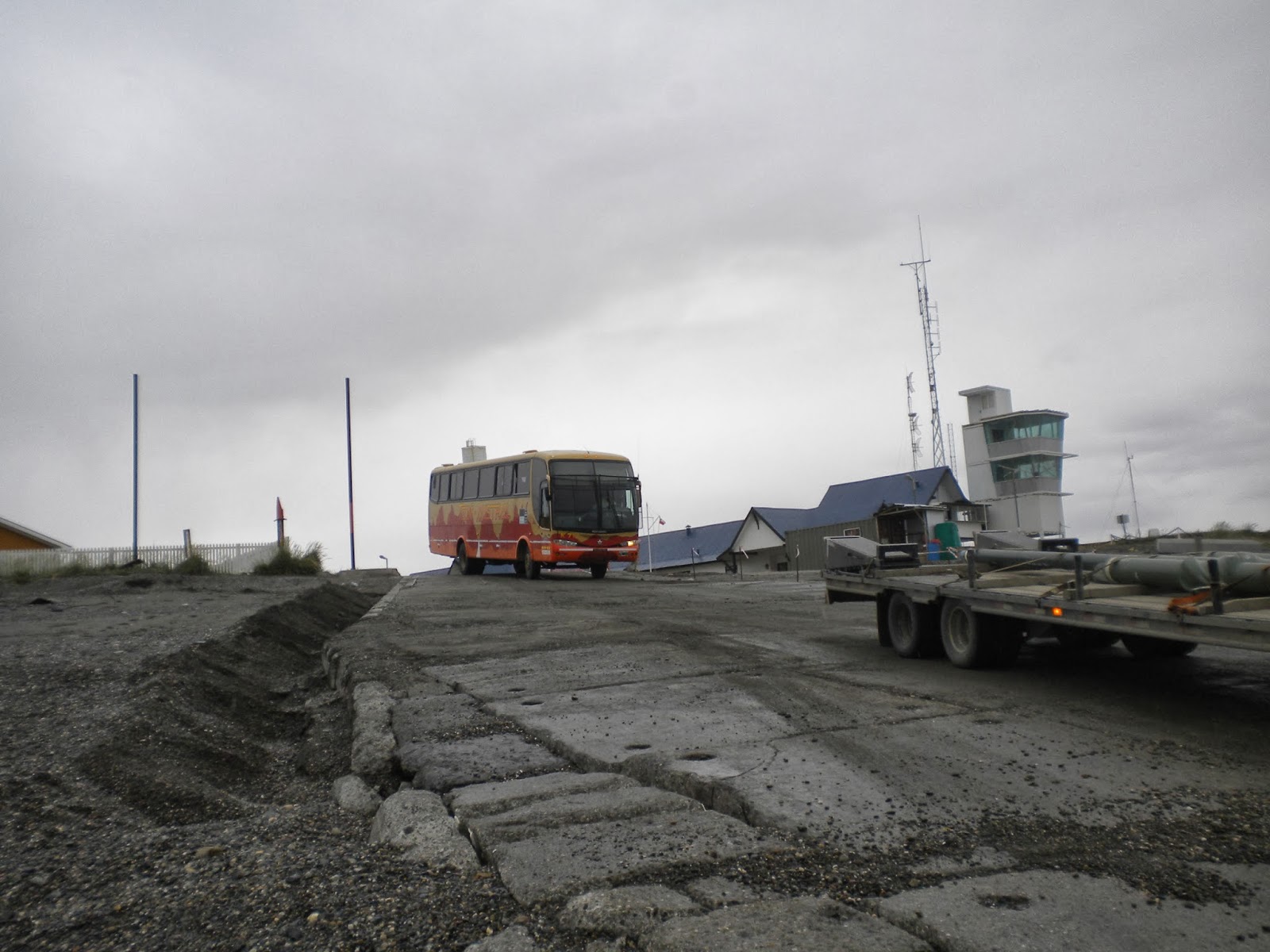 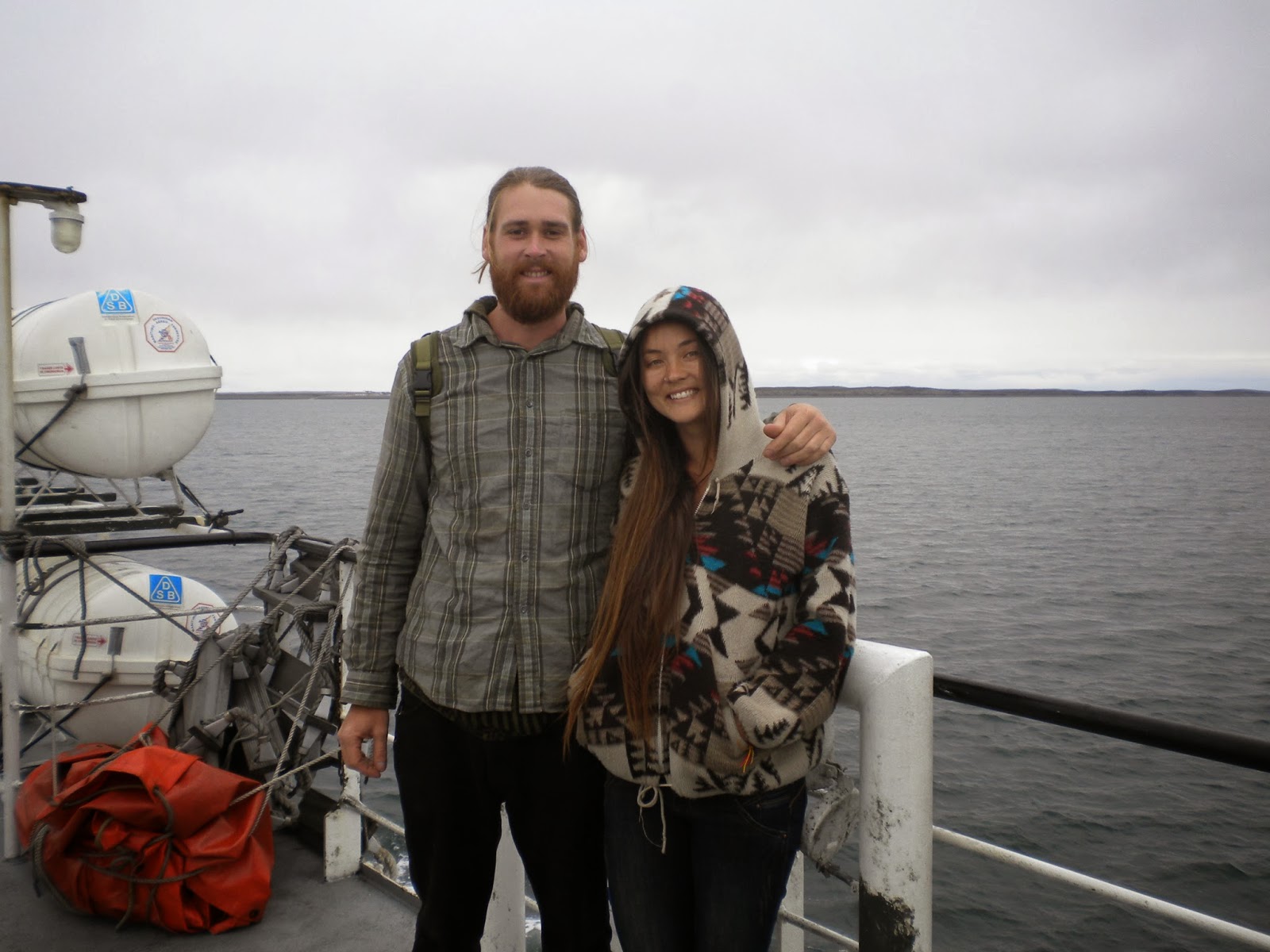 Once on the other side, the bus drove off the boat ramp, and onto solid ground, on Isla Tierra del Fuego.  We re-boarded, and we on our way to the Argentinian border again.  Another hour or so, and we had to all check back into Argentina, and stamp out of Chile, which luckily, is a much smoother, and quicker process than the other way around.  I thought that we were pretty close after that last border, especially after we made it to Rio Grande, the smaller city on the island.  We were still pretty far, and the day was turning into night, slowly.

We pulled into Ushuaia at 10:30 PM, making it a 14 hour bus ride in total, from Rio Gallegos...We were beat, but ready to party, if there was anything going on!  We literally ran from the bus stop up the hill towards our hostel we had reserved.  We arrived at the door of "Cruz del Sur Hostel," and they opened the door to a ton of people partying and eating inside, where they handed us empanadas.  We put our stuff in the dorm room, and came back upstairs to join the festivities, and met a group of Brazilians, who were super cool, and offered us "Cynar," a strangely good liquor made from artichokes.  Suddenly we realized that 2013 was minutes away from being over...Wow.  A new year, and sadly, the quickly approaching end of our amazing journey...Not so fast, we've still got a lot of ground to cover! 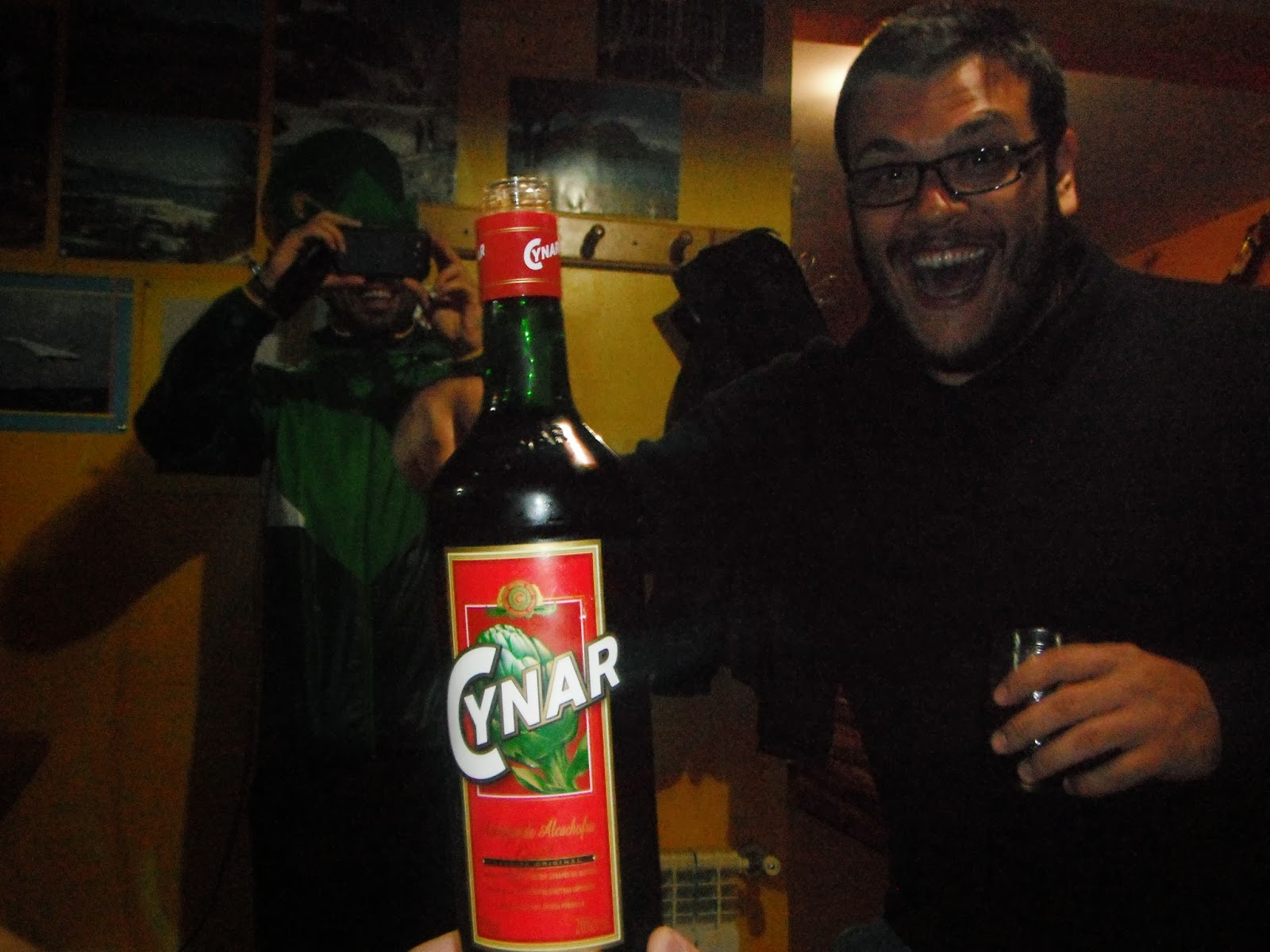 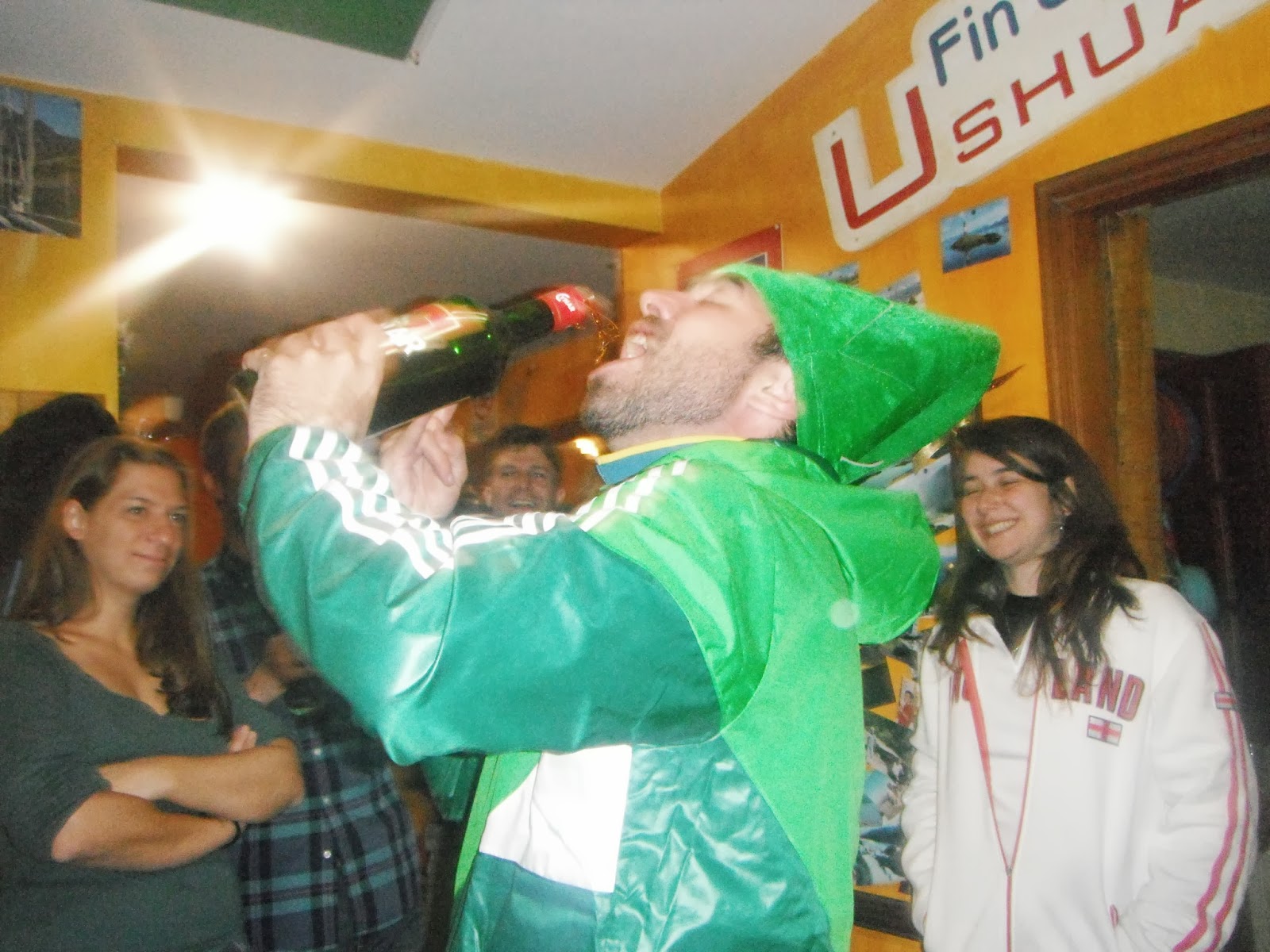 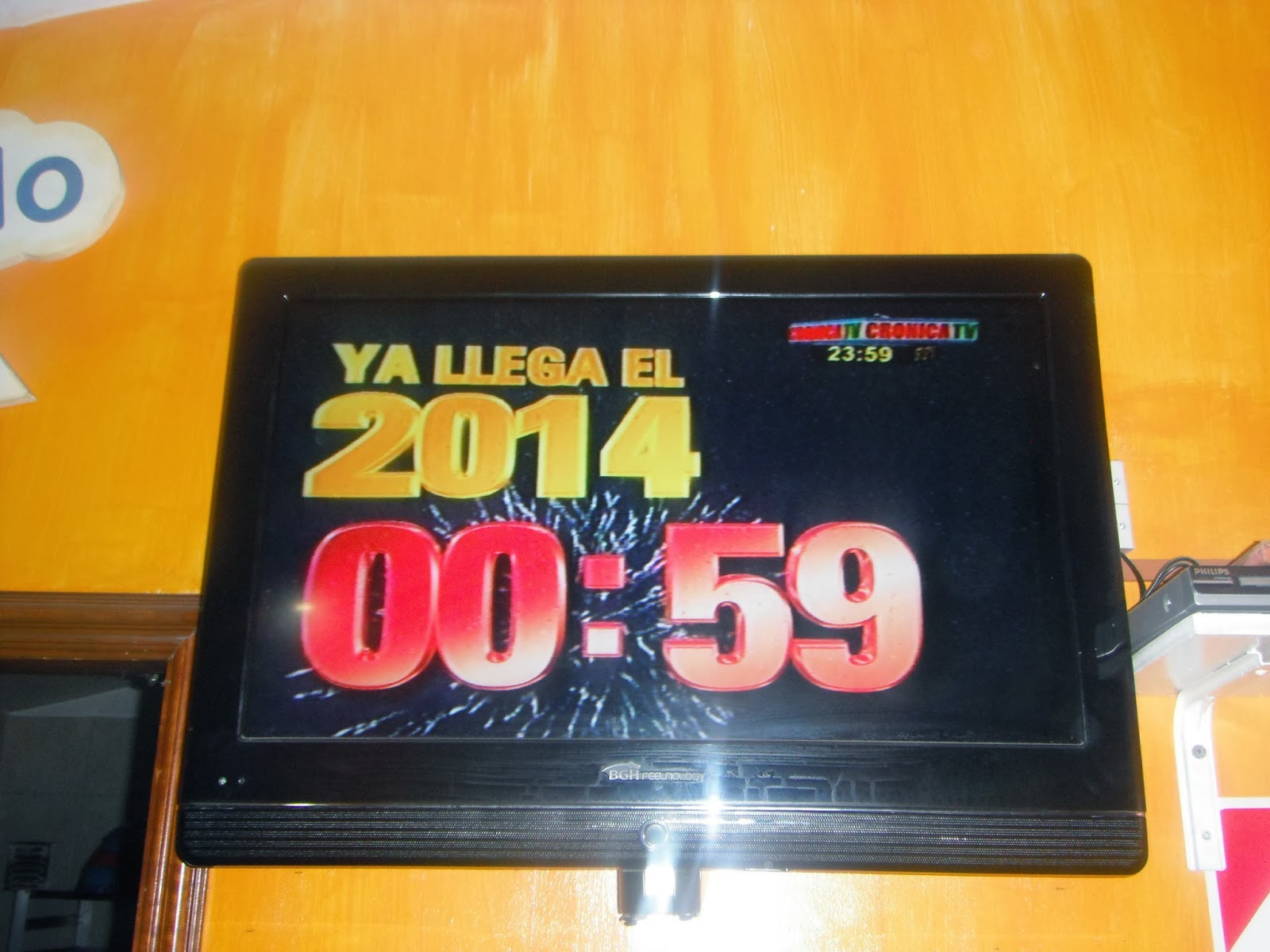 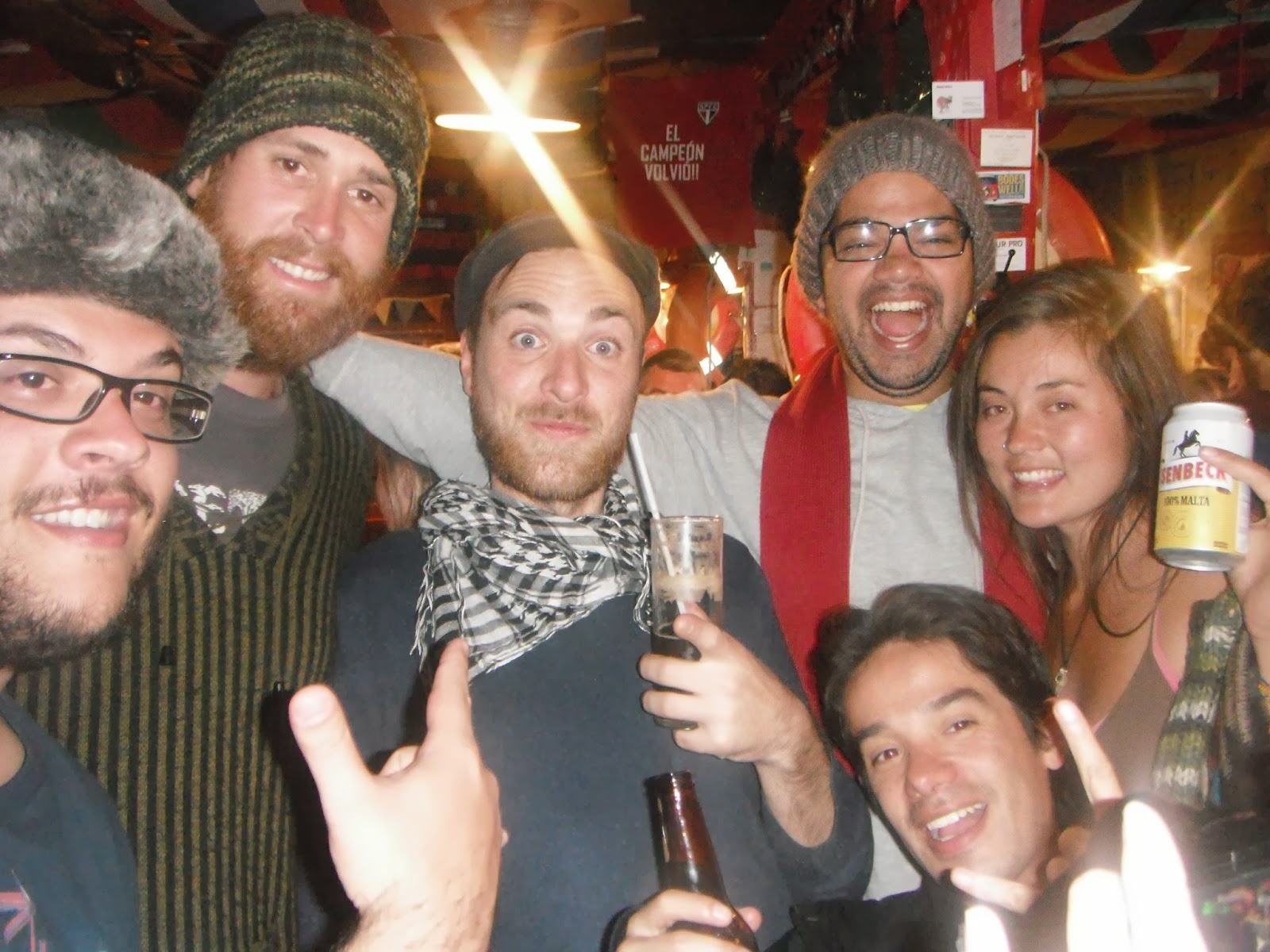 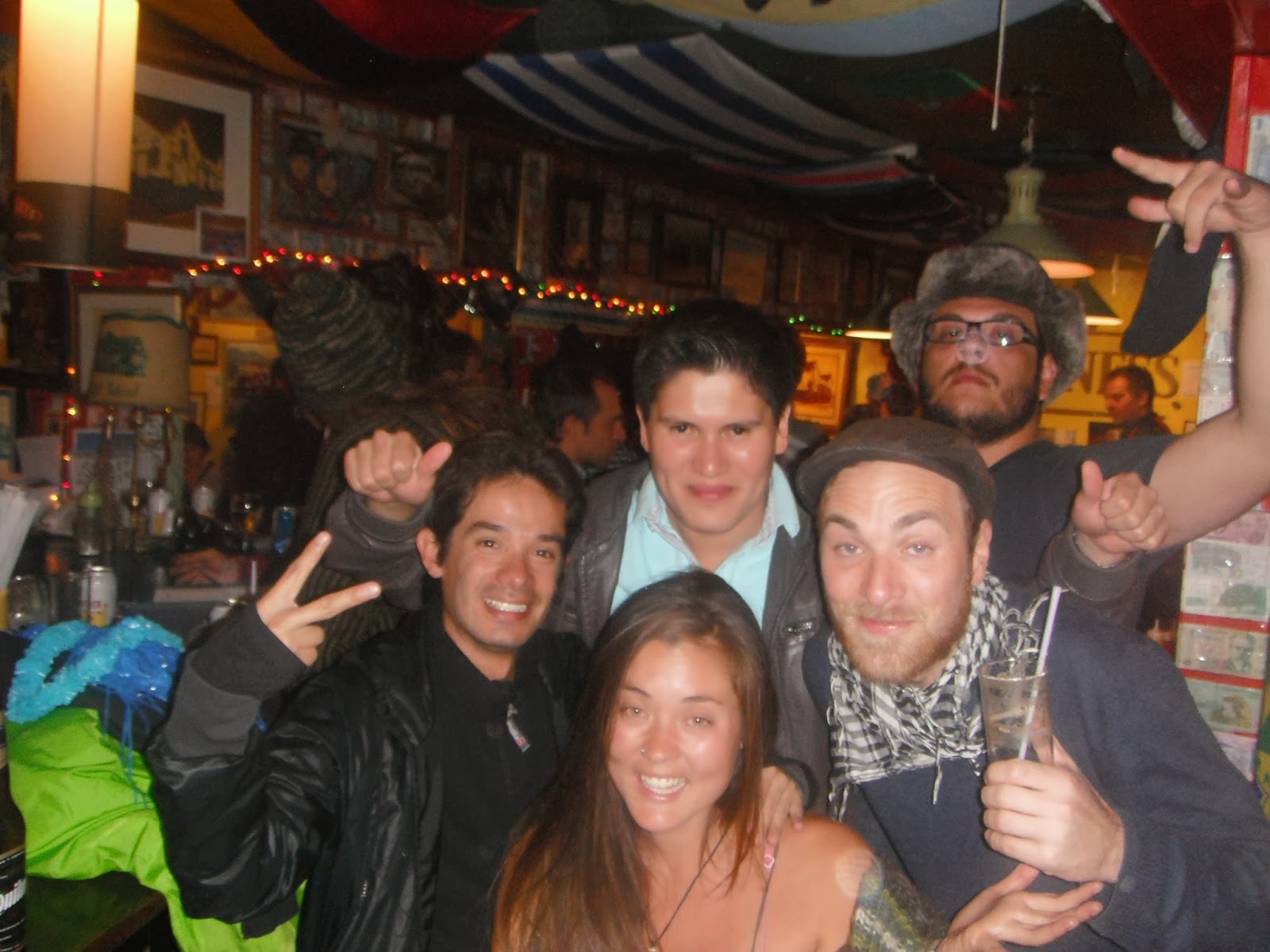 We made some new friends at our hostel, and ended up having a blast there.  The owners were the nicest people ever, and after our 2 nights that were reserved, we didn't realize there was nothing available in the whole city, due to the holiday season.  They let us crash on the floor in the living room for a couple more nights, and thanks to them we were able to make the most of our southernmost trip!

We walked all around the city, in the freezing cold 'summer,' with rain falling in and out of the day.  Ushuaia reminded me much of some cities I visited in Alaska several years ago, due to it's surroundings and temperature.  It was gorgeous.  Situated right on the Beagle Channel, with Chile just across the way, and some scattered sailboats and cruise ships, as well as Argentine naval vessels about the waterfront.  We walked up to the Martial Glacier, as it's called, and had the most incredible view of the city on our last day there, and were pleasantly surprised by the sunshine that greeted us atop... 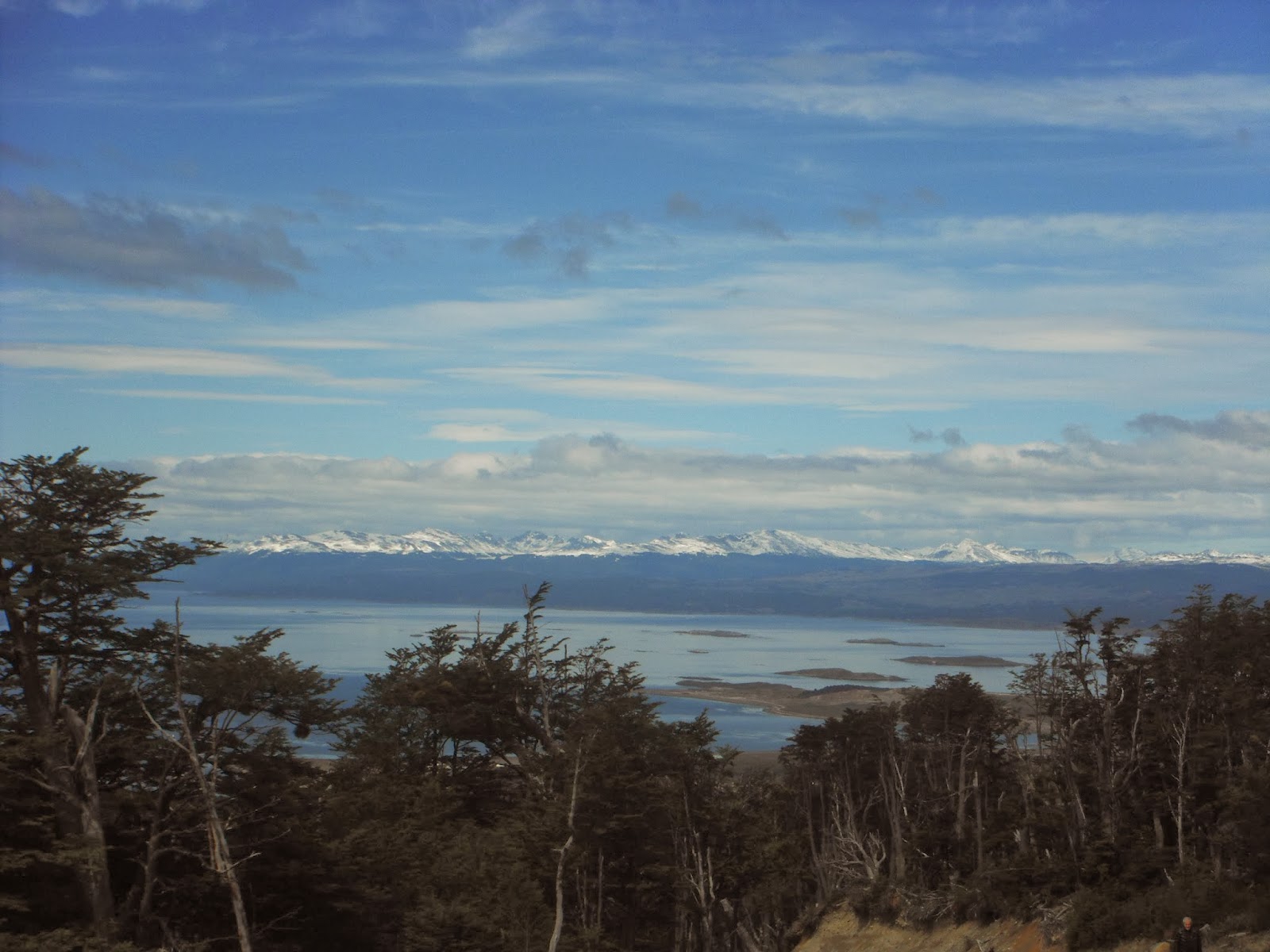 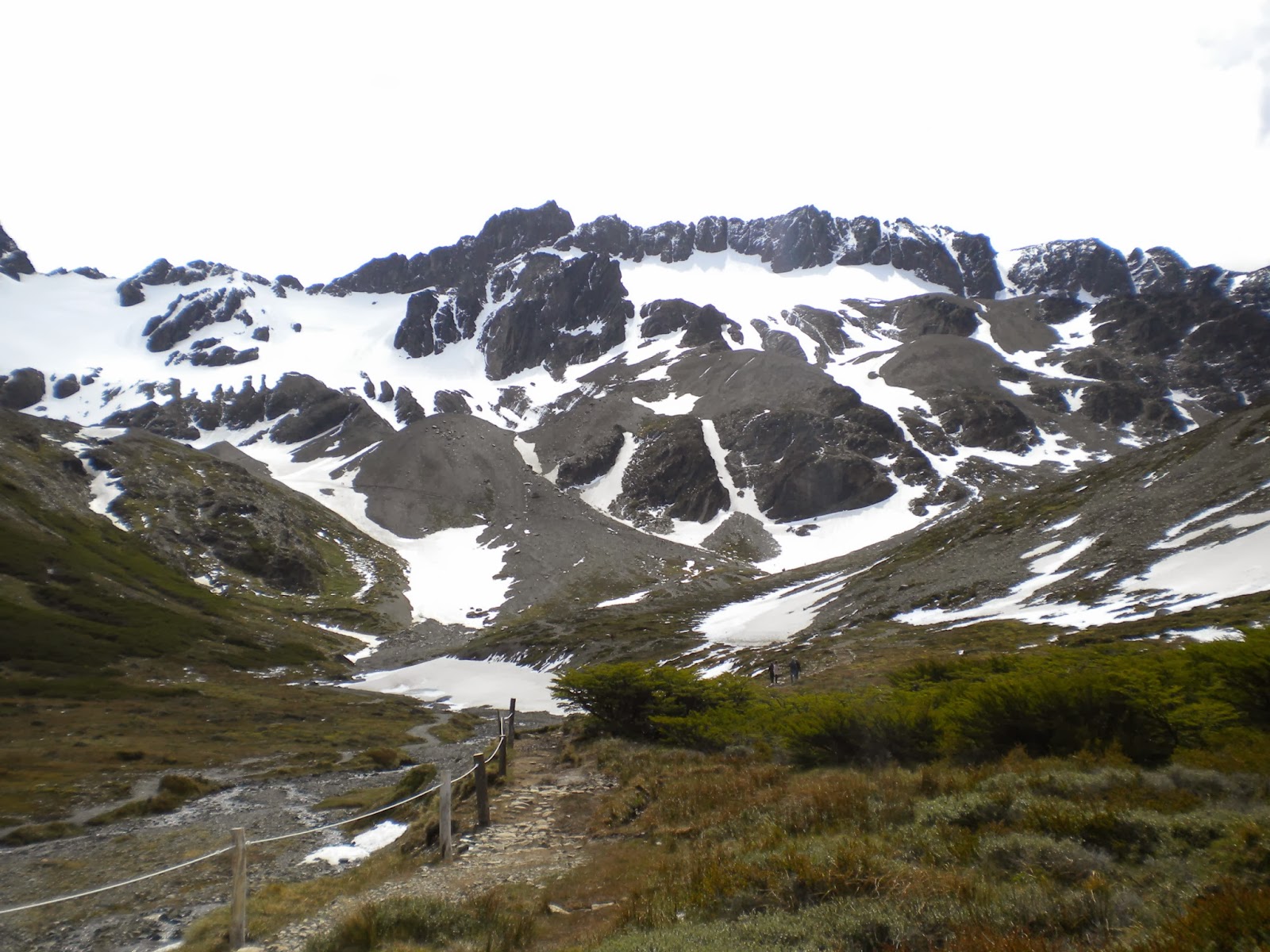 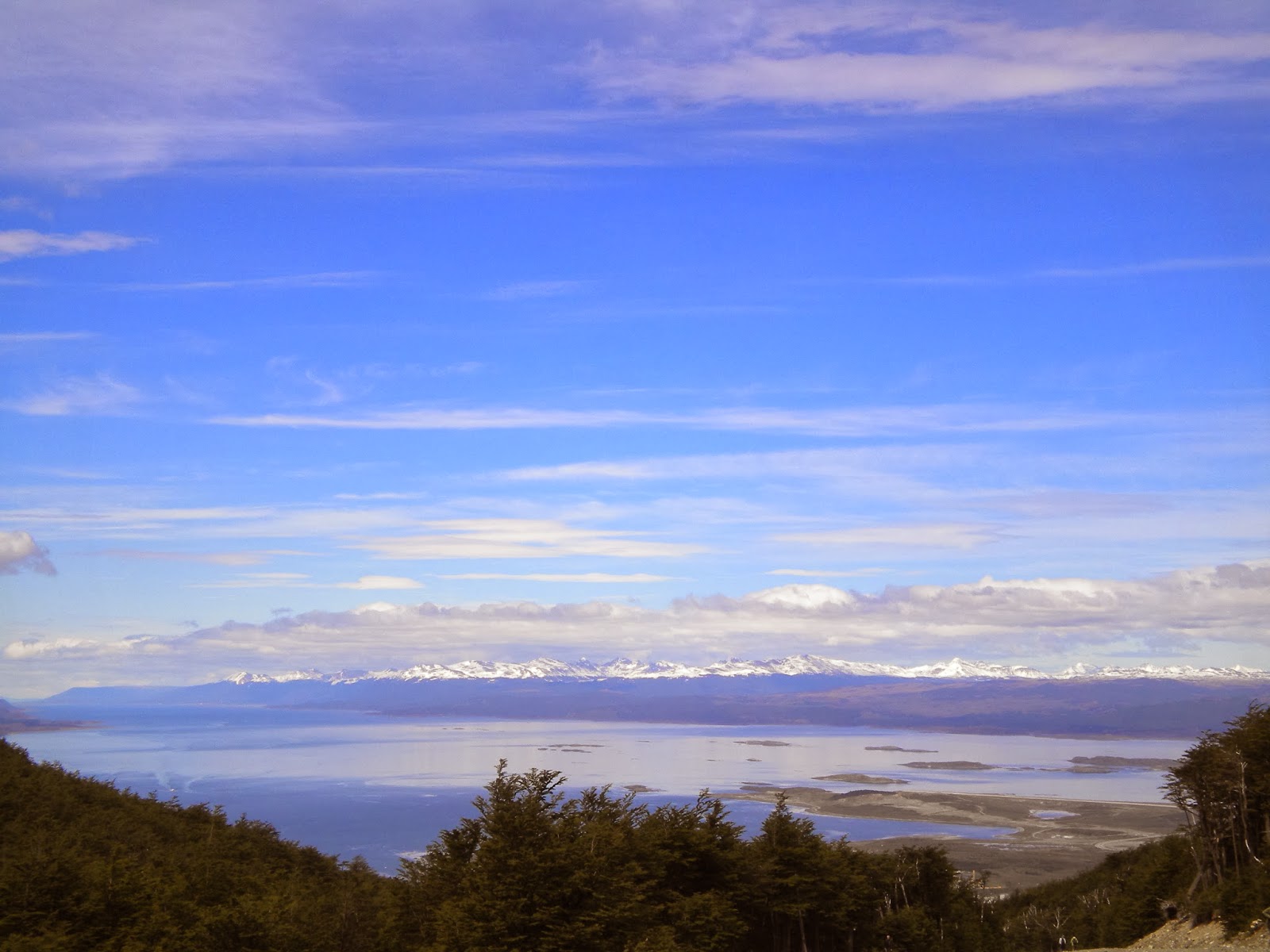 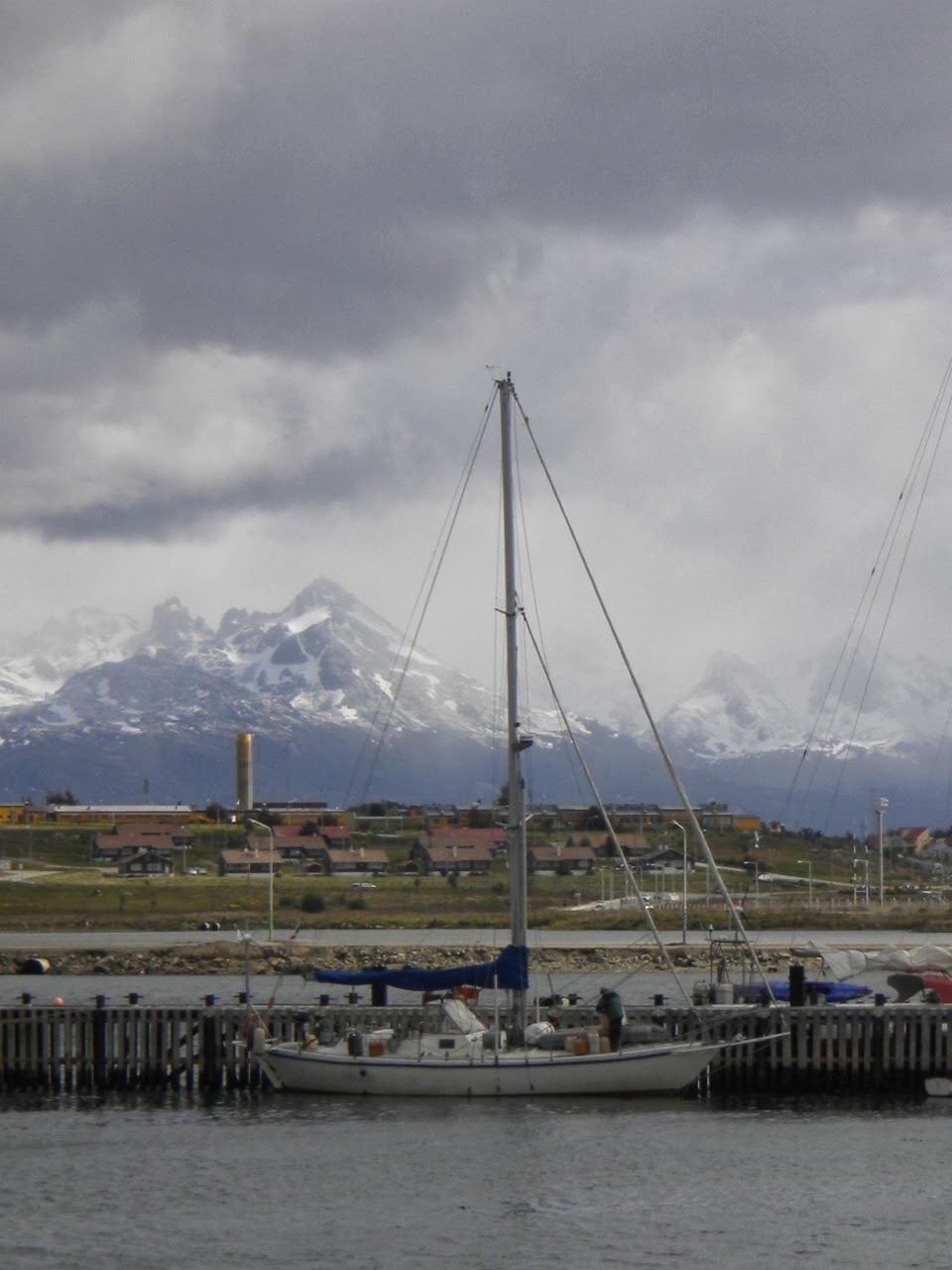 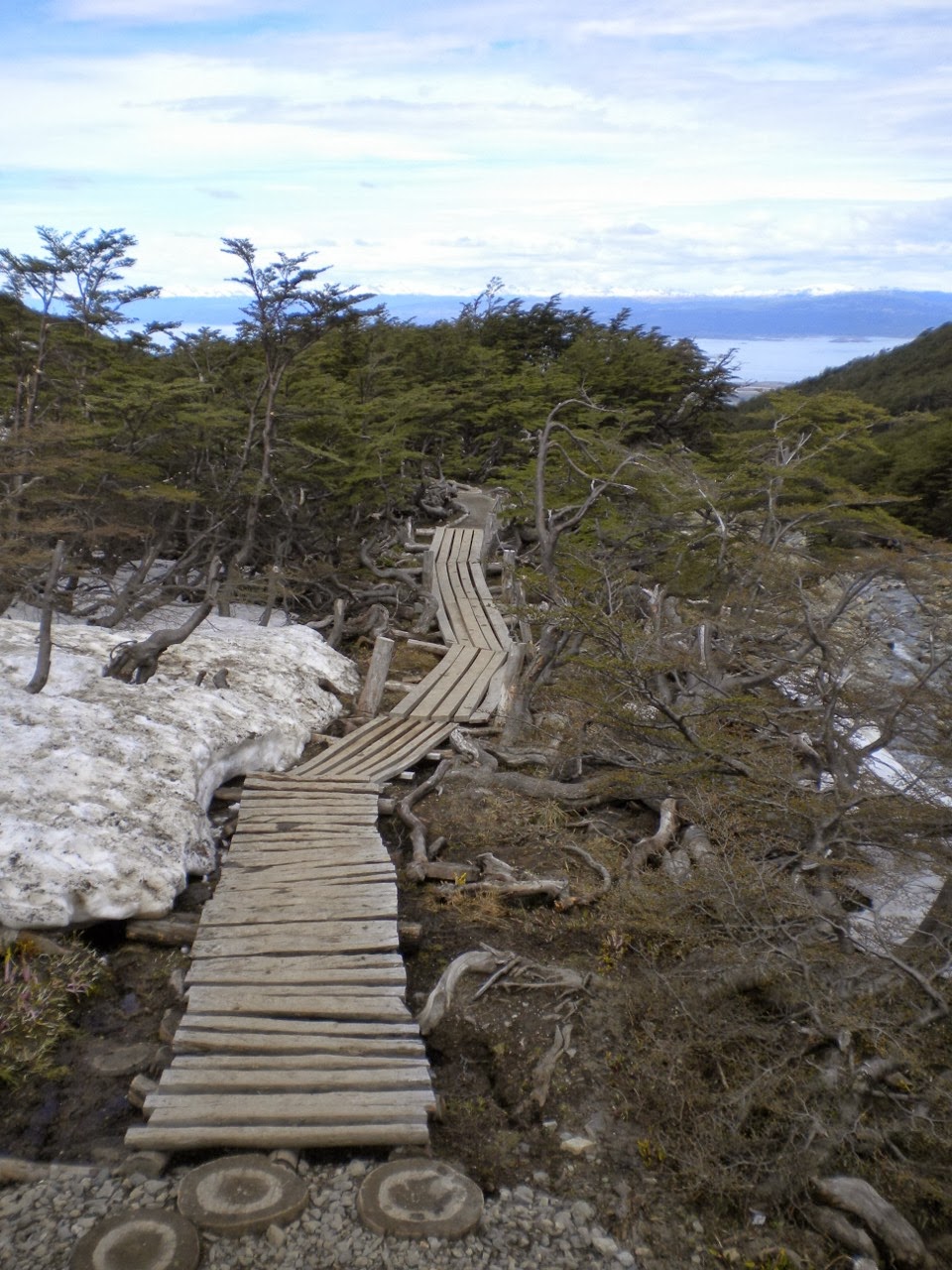 We spent 4 nights at the hostel, and like I said, met some really cool people.  The group of Brazilians were awesome.  The night before we left, they gave us a shirt from their Sao Paulo Pub Crawl business, and told us we were welcome there if ever in Brazil...Next trip!  The mother at Cruz del Sur Hostel, Marisha, walked up to me with a bag of goodies for our bus journey, which was so nice of her.  What a great place to visit, and an amazing hostel.  We really lucked out.

Next morning was going to be a long one.  All the way back to Rio Gallegos with all the border hopping madness included.  We would wake up at 4 am to get packed up and head to our five o clock bus.  The sunrise over the very calm Beagle Channel was unbelievable.  Turned out, the drivers were the same as on the way there, and were 2 really nice guys.  Alejandro, the assistant, was so cool.  He spoke English very well, and loved talking to us.  I had told him the following day was going to be Danica's birthday, and during one of our many stops, he get everyone on the bus to sing for her, it was awesome. 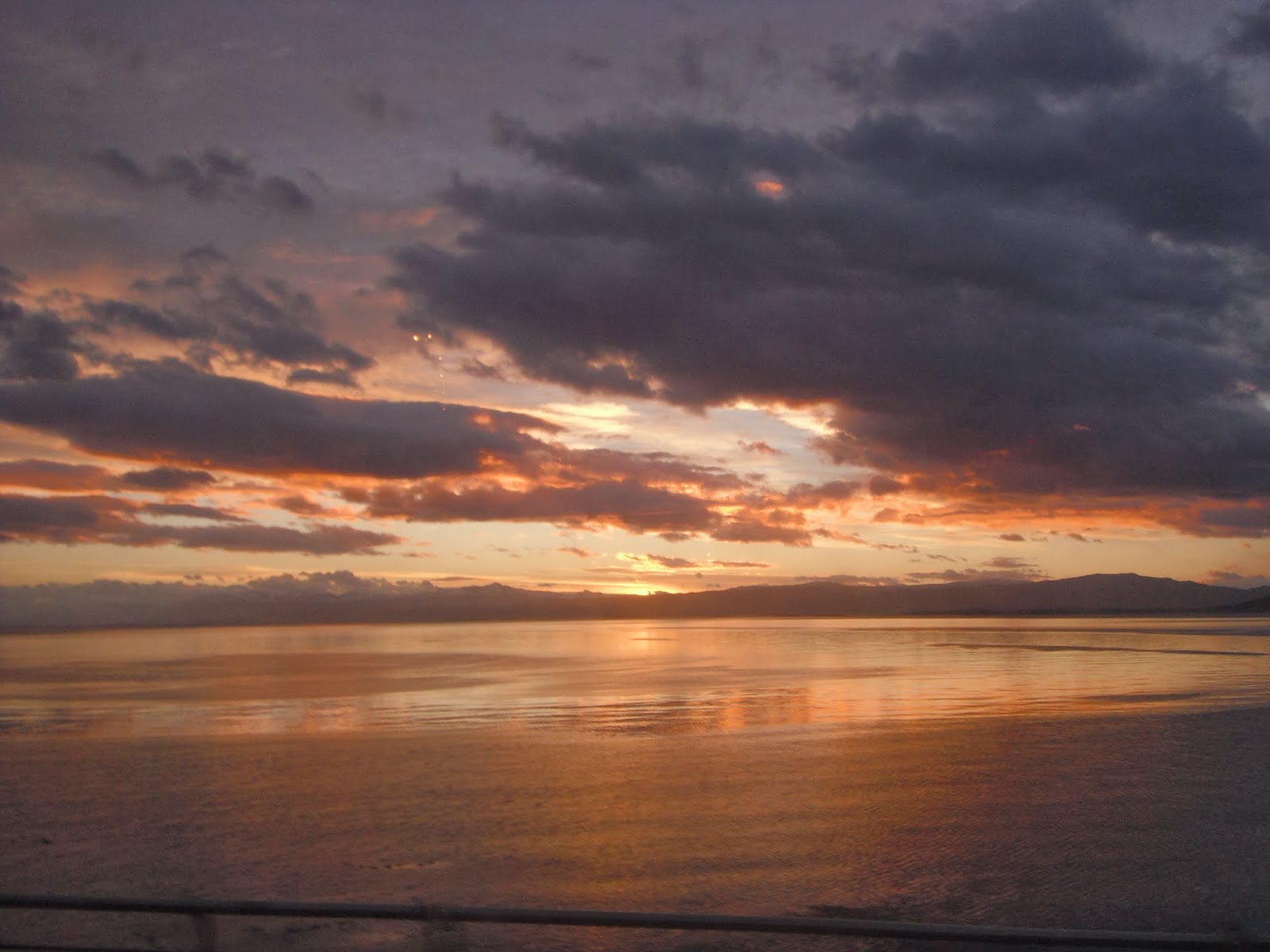 We made it back across the Strait of Magellan, this time with some pretty fierce and freezing wind and waves crashing aboard.  Back on the mainland, we once again stamped out of Chile, and into Argentina, hopefully the last time for a while anyways...We hit the bus station in Rio Gallegos at 7:15pm, just enough time for our continuing bus, aboard "Via Tac," up the Atlantic coast, to Puerto Madryn for Danica's 25th birthday, taking a huge chunk out of the country going north, and far away from the land of fire.
Posted by Andrew Turner at 8:27 AM